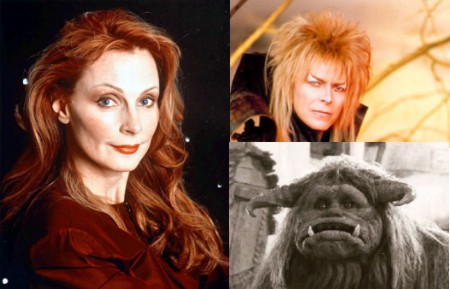 What do Beverly Crusher, Ziggy Stardust, and Ludo have in common? Gates McFadden worked with Jim Henson as a choreographer for the movies The Dark Crystal (1982) and The Muppets Take Manhattan (1984) and as Director of Choreography and Puppet Movement in Labyrinth (1986). As an actor she goes by "Gates," while as choreographer she is credited as Cheryl McFadden (her real full name is Cheryl Gates McFadden, after her late mother, Veronica Gates McFadden).

And a cool piece of Dr. Crusher trivia: Gates McFadden, who considers theater her true love, is trained in stage swordfighting - as is Marina Sirtis (Deanna Troi). Yet only the male actors were allowed to use swords in the Star Trek: TNG episode "Qpid" (1991, the one where Worf, dressed all in magenta-scarlet, complains "Sir, I must protest. I am not a merry man!")

I always knew Gates McFadden was cool, but the puppeteering and swordfighting just top it off.

3 Responses to "Dr. Crusher Pulls All the Right Strings"