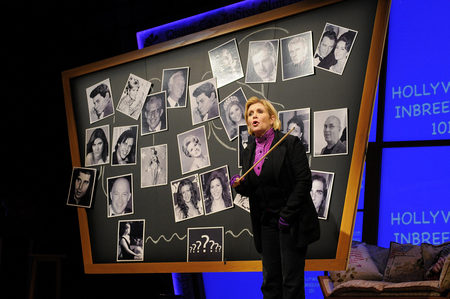 Those of you lucky enough to be in the Bay Area before April 12th might want to swing by the Berkeley Repertory Theater to catch Carrie Fisher's one-woman show, "Wishful Drinking." Ms. Fisher takes audiences on a one hour and forty-five minute ride through her life "from having Elizabeth Taylor as a stepmother, to marrying (and divorcing) Paul Simon, from having the father of her daughter leave her for a man, [and] to ultimately waking up one morning and finding a friend dead beside her in bed."

Don't worry, Star Wars fans. This isn't an hour-and-a-half of Lucas bashing. One reviewer from The Daily Californian confirms that "'Wishful Drinking' does not disappoint, devoting substantial time to Fisher's life-changing 'Star Wars' experience." And she ends each performance with her most famous speech: "General Kenobi, years ago, you served my father in the clone wars..."

PS: For those of you (like me) who won't be able to make the show, check out this 2005 episode of NPR's Fresh Air where Fisher describes "the speech burned into her brain."