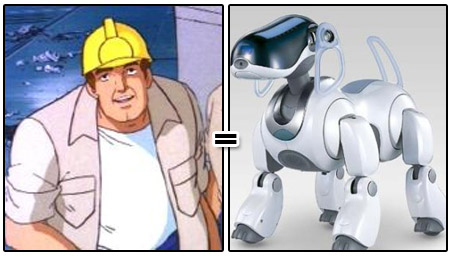 We Named the Dog Sparkplug

The new Transformers series seems to be taking a lot of guff for being either too stylized and Flash-based or too "kiddie" for its own good. I am -- and shall continue to be -- a staunch supporter of the show because, well, I just have a lot of love for those of the Cybertronian persuasion.

But I did notice something alarming in last week's episode: Sari's little robot dog was named "Sparkplug" and looks just like the the dog pictured above -- only animated, of course. I had to back it up twice to make sure, but it's true! Anyone who watched the original series knows that this is a head nod to Sparkplug Witwicky, who was a super-skilled human mechanic.

I'm not sure how I feel about this. I always loved the original character, mostly because he would often pull the Autobots' lugnuts from the fire at great personal risk to himself. All this little dog does is bark and wobble around a little.

Why would they take a character as noble as Sparkplug and turn him into Aibo? I don't mind the head nod. But reducing a pillar of coolness to "Bark, bark (wag tail)?" Maybe if Sparkplug was some kind of robotic Lassie and saved Bumblebee from falling down a well or something it'd make this pill a little easier to swallow. But that's not the case.

Hopefully they'll make up for it later. In any case, I still dig the series and will keep watching.