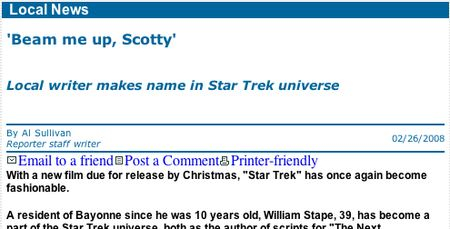 Middle-of-nowhere, NJ rag Bayonne Community News ran a puff piece on hometown boy and Trek screenwriter William Stape yesterday with the following lead: "With a new film due for release by Christmas, 'Star Trek' has once again become fashionable."

Since when does Trek "become fashionable" only in the months surrounding a movie release? And since Trek XI has been re-scheduled for '09 -- long before the aforementioned article published -- does that mean that Trek isn't "fashionable?"

Let me translate this lead from bad-writer to geek-speak. What Bayonne scribe Al Sullivan really meant to say is, "Since there's a Star Trek movie coming out sometime soon, I can slap some twenty-year-old nerd headline on a piece about a local guy who does geek stuff I wouldn't normally give a damn about and my editor will totally take it."

Yep, I'm working my way up to a full rant about the so-incredibly-wrong "geeks don't really have a life" myth. But I'm going to save it for the next podcast. Here's the short version, for people like Al: Geeks have great lives full of all the same things you want -- geeks just don't necessarily share these things with you.

In the meantime, please don't allow any of the muck I'm slinging to attach to Mr. Stape, who happily helped to bring us at least one ST: TNG and ST: DS9 episode. I'm just sorry he didn't get to talk to someone more interested in what he had to say.