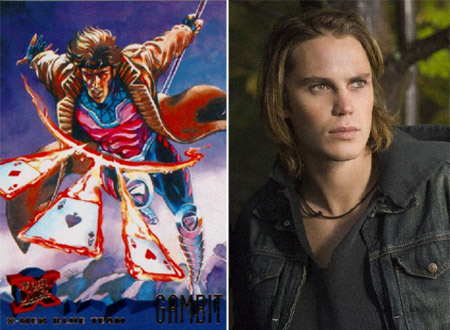 So I hear that Taylor Kitsch will be playing everyone's favorite (or despised) Cajun -- Gambit -- in the new Wolverine movie. In the immortal words of Mal: "Hmpf."

You can always recognize Gambit via his traditional garb -- a long trench coat and (most of the time) a fighting staff. He can charge any solid object with energy that explodes like a plasma grenade on contact. His biggest weapon however, is his southern charm and boyish smile, which he employs at the drop of a hat.

Though many have never forgiven him for turning on the X-Men, becoming a Horseman of the Apocalypse -- Death, no less -- and trying to wipe out all his former colleagues, I've always been a Gambit fan. Sure, he has issues. But in his defense he was under mind control at the time. Plus, he does turn it around later and make it right.

This is a guy who gets caught in the middle of everything and normally is on the losing end of the battle -- no matter what side he chooses. Why does he keep at it? Simply put: he loves Rogue and would do anything for her. I can respect that.

Of course, it's a comic, so it stands to reason that the greatest lover in the Marvel world has the hots for the one chick that is physically incapable of touching anyone skin to skin. Which leaves Gambit perpetually... frustrated.

He's also normally on the wrong side of Wolverineâ€™s temper, so I canâ€™t wait to see how that works out in the new movie. Think of Gambit as the yin to the yellow tights' yang. If Logan would use brute force to resolve a situation, Gambit would charm his way through.

The upcoming movie should be interesting. Do us proud, Taylor.

3 Responses to "Taylor Kitsch As Gambit"