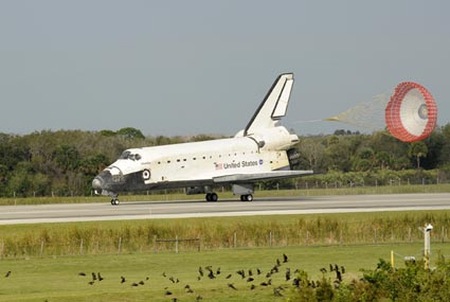 At 9:07 a.m. ET this morning, the Shuttle landed at KSC's Shuttle Landing Facility, successfully completing a 13-day mission to the International Space Station. Besides a quick blurb on CNN and some blog posts around the 'net, it went pretty much unnoticed.

That always perturbs me a little bit. When I was in college in Florida, I saw numerous Shuttle launches -- and was pitched out of my bed during the overnight on more than one occasion by a late-night Titan launch. You really have to see a launch to understand how brute-force crazy our methods of reaching the black are compared to those in sci-fi.

I had the privilege of seeing the STS-43 launch from the press site. A friend of mine working for Westwood One at the time slipped me in as a backup feed technician. (Somewhere in a box in the closet I have a picture of me -- complete with bad 80s big hair -- standing by the big clock.) For those of you who've never taken KSC's red tour, the press site is 3.5 miles from launch complex 39, which means you're pretty much as close as anyone (not in an APC) gets to the big show.

When the main engines ignited, the sound literally shook the ground. I had just about enough time to realize that this was the quiet, environmentally-friendly part of the STS before the 6.6-million-pound thrust solid rocket boosters (SRBs) ignited and easily tripled the fury. I watched in awe all the way through SRB separation, which is actually visible to the naked eye on a relatively clear day.

My thoughts: this is as close as man comes to flying the bird at God (or nature, however your beliefs fall). It's not an elegant solution to the problem of getting from here to there. It's blowing s--- up on a huge scale, ramming a device full of people into the sky.

I saw the 43's landing as well, though it was a difficult task. I got to the shuttle landing facility (SLF) early in the morning and stood around with all the press people eating doughnuts and drinking coffee. I learned that most talking heads don't wear pants, instead opting for a dress shirt/tie/suit jacket over jeans and sneakers (or even surfer shorts and flip-flops). We watched the shuttle training aircraft -- a Gulfstream II with a heavily-modded Shuttle-like cockpit and the ability to engage reverse thrust in flight to simulate the Shuttle's less-than-stellar glide ration -- make approach after approach, stopping only once the orbiter had completed its de-orbit burn.

Around that time, the powers-that-be announced that there was an issue with the orbiter not completely clearing the propellants from the reaction control system, so we had to all receive training in how to don the hundreds of sets of breathing apparatus they keep around to protect us in just such a situation. We went through a whole re-accreditation process, then stood around in groups as the print photogs snapped shots of NASA employees demonstrating the gear.

Much later we heard the distinctive double-boom and saw the the orbiter drop like a rock at its insane 22-degree nose-down glideslope. Before I could blink, it flared and silently touched down, rolling past us.

It was a heady moment. I was looking at an object that had (just 30 minutes ago) been in orbit.

A few years later I returned to Central Florida on a business trip and took a little side jaunt over to a small airport near KSC where I rented a little Cessna 152 and did something I've wanted to do for some time: tour the 'center by air. Though I doubt they still do this in our post-9/11 world, back then you could approach the restricted area around KSC, ask for a flight-following handoff to the KSC tower, and request "the tour." If they weren't too busy (or doing something dangerous), they'd clear you into the restricted area and route you near the launch sites -- and even allow you to make a "low, slow pass" over the SLF.

As I approached the SLF, I noticed the visual approach slope indicators showed double-red all the time, telling me I was constantly below the glideslope. (They're configured, of course, for the Shuttle's steep approach.) The runway is huge -- 15,000 ft. long and 300 ft. wide -- you can see it from space. It also takes quite a while to putter down it 50 ft. off the ground in a 152 at 50 knots.

I apologize for rambling so much, but I do have a point. Even if NASA has handled our space program badly -- and these launches and landings seem completely mundane -- remember that they're still the closest you'll come to hopping a Firefly or jumping in a shuttle to head for that Federation ship waiting in orbit.

Why not take a few minutes out of your day and check out the next launch/landing on NASA TV? It don't cost nothin'.