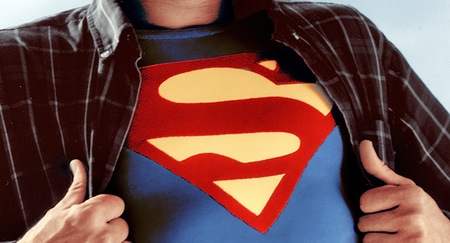 When I saw today's io9's recall of the long (and thankfully) lost Superboy show, it reminded me of my first (and only) close encounter with the Superman franchise.

Some of Superboy was filmed at the University of Central Florida during my brief time there. In fact, someone happily edited this into UCF's Wikipedia page recently -- don't look at me! -- noting that "Superboy prominently featured the Library and Phillips Hall." If memory serves, the library is easy to pick out because there's a big fountain between it and the administration building, which student legend says was designed in to make it easier to defend the administrators during times of civil unrest. (Must've been those killer progressive-fine parking tickets.)

But the fun part was Phillips Hall. A number of my friends lived there, and they all boast crazy Superboy encounters.

My fave: imagine waking up after a serious college bender, peering bleary-eyed out your not-first-floor window to see the caped 'boy fly by your window. Then fly by backwards. Then forward again. Eventually, curiosity bested hangover, and my friend opened her window to find out what was going onÂ  just in time to see Superboy hanging from a crane for a flying scene -- and to get bitched at by the crew.