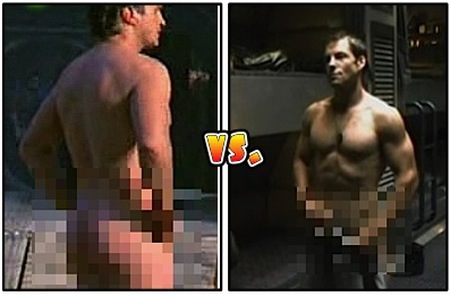 Butts In Sci-Fi: Humor Or Sexy?

Since our discussion in Podcast #86, the GWC Forum has been alight with discussion of the role of men's butts in science fiction, specifically revolving around two scenes: Mal's appearance in the Firefly episode Trash and Jamie Bamber's candid moment in the Battlestar Galactica episode Final Cut.

As a guy who's interested in women -- much respect, though, to those whose taste runs different, and I'd love to hear your take on this -- I don't get anything from either Mr. Bamber's towel scene or Mr. Fillion's bare-ass-and-I-don't-care-'cause-I-just-got-paid moment, which led to my initial comment. I was certain that most women viewed Mal's moment in the sun in the same way they do Lee's slip-'o-the-towel.

So while I understand the concept, I still don't get it. Help out a straight male fellow fan. How do these scenes really differ?