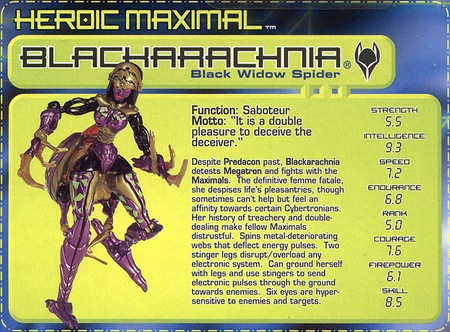 Paul Goebel over at TV Squad popped a trivia question this morning that got me thinking. The question?

Who did Blackarachnia fall in love with?

The answer's easy: Silverbolt. But there's a lot more to the story.

The short version is that Blackarachnia was originally a Maximal but was stolen (so to speak) by the Predicons. She was cruel and pretty bad, but Silverbolt thought she was not only hot -- she was damn hot for a bug chick -- but he thought he could change her evil ways and they could be happy together.

In Season 2 or 3 -- I can't remember which -- she did grow to love Silverbolt and did, in fact, change sides. (Be warned, though: this only works in comics. Do not attempt to win an evil chick's heart in real life. She'll kill you.)

It was a great Romeo and Juliet story that really brought Beast wars home for me.

An interesting side note is that they've brought Blackarachnia back in Transformers: The Animated Series, and not only is she half organic, but it looks like Prime might be her love interest this time. How freaky is that?

(Props to my mom, by the way, for setting up a sweet-ass box system for me to keep the card backs of all the Transformer boxes I had when I was a kid -- like the one pictured above. Mom, you rule!)