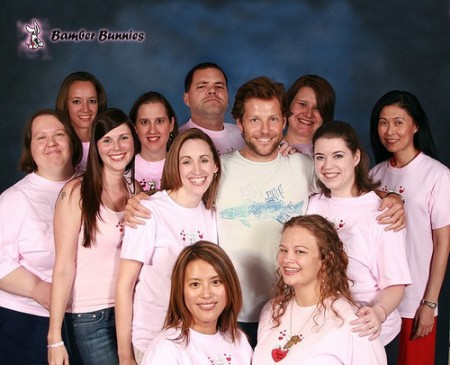 Note: Youâ€™ve probably heard a lot of discussion about some of the things Jamie Bamber and Aaron Douglas said during Dragon*Con recently. Well this post isnâ€™t about those things. Itâ€™s about some of the other awesome things that happened at D*CÂ -- as experienced by longtime GWC community member Raemani. Iâ€™ll let her take it from here.Â

Because it definitely colors my experience, I should start out by saying that I decided to go to Dragon*Con while hanging out on the SciFi.com forums in the Jamie Bamber appreciation thread â€“ we call ourselves the â€œBamber Bunnies.â€ Eight of us who talk there went, and three of the girls brought their husbands.Â  In addition, about twenty other people from around the forum joined us there.Â

Iâ€™d also like to point out that I owe all of my pictures -- which you can view in the GWC photo pool -- and videos to the people I was with.Â  Because there were so many of us, there was really no need for me to take pictures. As it was we had over 600 pictures between us after the event.

Read on past the jump for a daily breakdown of my experiences.

My flight was really, really early. I had to leave the house at 3:30 am -- it takes an hour and half to get to the airport -- since it was cheaper to fly out of Newark. While waiting in line at security I saw people taking pictures with some guy who I recognized, but couldnâ€™t think of who it was.Â  It turns out it was Evander Holyfield. Other then that, my flight was uneventful. I waited at the airport for friends to arrive.Â  We got to the hotel at just about 1 p.m. -- the same time as the first panel, Star Trek vs BSG, started -- so we were running a little behind. We headed down to registration.

Note: If youâ€™re planning on going to D*C, definitely pre-register;Â  the line is much, much shorter.Â

After registration we headed to the first panel and saw the last 15 minutes, which consisted mainly of questions for the Star Trek people. The BSG group looked kindaÂ  bored. Apparently there was some funny stuff earlier in the panel (some of our group was there) but I missed it.Â  By the end of the panel the rest of our group had arrived.

To kill time we went to the Walk of Fame and met Jamie and Aaron for the first time.Â  There was little to no line for any of the celebrities at this time.Â  All I can say is they are the nicest, funniest, most down to earth people.Â  They were more then willing to just talk to you.Â  We all bought autographs -- the BSG folks were $20/autograph.

A couple of interesting experiences stand out in this first visit:

One of our members was diagnosed with Breast Cancer about a year ago.Â  Ron Mooreâ€™s wife posts regularly at the SciFi board and has corresponded with one of the Bunnies. Mrs Ron, as sheâ€™s known on the boards, had mentioned the woman who was fighting cancer to Jamie, and he sent her a lovely e-mail. She is now in remission.

The girl who corresponded with Ronâ€™s wife and posted the letter for all of the Bunnies to see was with us. When Jamie recognized the her handle -- it was printed on her badge -- the first words out of his mouth were, â€œHowâ€™s Tammie doing?â€ (Tammie is the girl who was fighting cancer). He then grabbed a picture and signed it for her, and said to his handler, â€œThis one is on me.â€Â

He has a great memory -- one of the other girls has been to at least three conventions in a little over a year, seeing him each time, and he knows her by name -- and is a kind and sweet individual.Â  I was a fan before, but his care for his fans is amazing and made me more of a fan of the man himself. He doesnâ€™t have a celebrity attitude and is very down to earth. He also has wicked sense of humor.

A few weeks before D*C we saw a rumor posted on Live Journal that Aaron had cancelled. (Katee had already cancelled at this point.) This sent a panic through all of the Bunnies who were attending D*C and basically started a push to get Aaron invited back as he has been there the year before.Â  Eventually the organizers said yes and Aaron was added to the list of Guests.

We confronted Aaron about it to see if he knew about it.Â  He not only knew about it he started it to get himself invited. It turns out that the post came from the girl who runs one of Aaronâ€™s websites. At this point one of the Bunnies after hearing this swung her purse at him. He ducked. We quickly forgave him, however, as he is very charming. In fact he is quite enamored with one of the girls that was with us and mentioned the bunnies several times in panels -- as you will see. We had planned before going to meet up with as many people from the boards Friday night, and after resting and people-watching for a bit, we headed to the spot we had chosen for the meet-up. We were successful in gathering about 18 people and headed to an Irish Pub that is near the hotels. There we drank, hung out, and enjoyed each otherâ€™s company until about 11 p.m. at which point we headed back to the hotel. We stayed at one of the overflow hotels, but we were still only about five blocks from the convention hotels.

Read on to page two for my Saturday experiences.